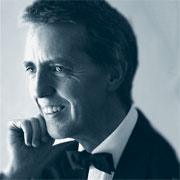 John Dexter is Director of the Goethe Choir, Co-Director of Dublin County Choir and Organist in Whitechurch. He conducted John Dexter Harmony (JDH) from 2001 to 2008 and the Guinness Choir from 1984 to 1991. From 1977 to 2001 he was Organist and Master of the Choristers in St Patrick’s Cathedral and from 1989 to 2014 Director of Music in the Cathedral Grammar School.

Previously John had been an Organ Scholar in Jesus College Oxford, and at St Paul’s Cathedral London, studying orchestral conducting with the late Norman Del Mar in the Royal College of Music. His first musical education was as a boy chorister in Guildford Cathedral.

In his teens he studied conducting and composition with Edwin Roxburgh and sang a specially commissioned solo work for Queen Elizabeth the Queen Mother and, at the age of 16, was awarded his first diploma, ARCO.

John learnt his trade through accompanying and singing in choirs. He has worked as rehearsal accompanist for Martindale Sidwell, John Eliot Gardiner, John Alldis, Ian Humphris, John Poole and Barry Rose, for the BBC Singers, the Moneverdi Choir and London Philharmonic Choir. He sang in the Academy of St Martin in the Fields Chorus under Neville Marriner, Collegium Musicum under Laszló Heltay, Schola Cantorum of Oxford under Nicholas Cleobury, Proteus Choir under Vernon Handley, Brighton Festival chorus under Kempe and Dorati and London Symphony chorus under Gergiev.

As a student in Oxford he was Conductor of the Kodaly Choir and Assistant Director of Schola Cantorum. He now lectures in Counterpoint in Trinity College Dublin.