Due to the Covid-19 emergency, we are not yet in a position to schedule any concerts featuring the choir.  However, we are hoping to hold our usual Christmas concert in December 2021 and will release details of this as soon as they are confirmed.

T0 celebrate the 250th anniversary of the birth of Ludwig van Beethoven, the choir was scheduled to perform in a concert in the National Concert Hall in Dublin which included Beethoven’s Choral Fantasy and Bach’s ‘Wachet auf’ cantata.  We were meant to be joined by renowned pianist John O’Conor, who also played with the choir in 1979, when we last sang the Choral Fantasy.  This concert was in aid of the Carmichael Centre in Dublin.

Due to the Covid-19 emergency this concert had to be postponed.  It is hoped to reschedule the event at a future date – we will publish further information when it becomes available. 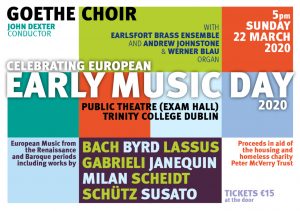 To coincide with European Early Music Day on 21st March 2020, the choir was scheduled to present a concert of early music in the Public Theatre (aka Examination Hall) in Trinity College Dublin on the following day, Sunday 22nd March.   The Early Music Day is a celebration of more than a millennium of music, through concerts, events, and happenings taking place simultaneously across Europe (http://www.earlymusicday.eu/).   The proposed programme contained performances of European music from the Renaissance and Baroque period including works by Bach, Byrd, Gabrieli, Janequin, Lassus, Milan, Scheidt, Schuetz and Susato.

Unfortunately due to government regulations introduced in response to the ongoing Covid-19 emergency, the concert had to be postponed.  We are hoping to be able to reschedule the concert at a later date when conditions allow and will publish further information when available. 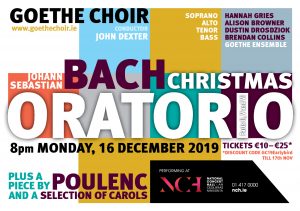 Following our successful performance of parts 1, 3 and 4 of Bach’s Christmas Oratorio in December 2018, the Goethe Choir returned to the National Concert Hall in Dublin on Monday December 16th 2019 to perform the remaining parts 2, 5 and 6 of the work to another sell-out audience, together with the Christmas Motet ‘Hodie Christus Natus Est’ by Francis Poulenc and a selection of carols.

Included among the soloists were Alison Browner (an Irish mezzo-soprano now based in Germany and a former member of the choir), soprano Elizabeth Hilliard, Irish bass Brendan Collins and the German tenor Dustin Droszdiok, who returned to sing in this concert after performing with us in the December 2018 concert and who delighted the audience with another wonderful performance, as did the other soloists.

The choir performed a programme of works by female composers at St. Finian’s Lutheran Church in Adelaide Road, Dublin 2 at 8pm on Saturday 29 June 2019.  The concert included works by: The programme contained a delightful and entertaining selection of works which may have been less well-known but which certainly deserved a wider audience, and which was much appreciated by a large audience. The concert was in aid of the St’ Finian’s Church roof fund.

The Goethe Choir gave a performance of Will Todd’s Mass in Blue on Saturday 25 May 2019 in St. Patrick’s Cathedral, Dublin.   The concert was in aid of Carmichael Ireland.    The choir was accompanied by the Will Todd Ensemble, and featured the composer himself on piano and Hilary Cronin as soprano soloist.

Close Encounters of the Third Kind – Friday 3 May 2019 at the National Concert Hall, Dublin 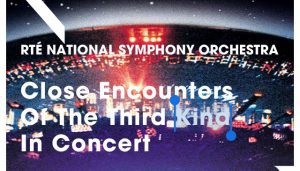 The Goethe Choir joined the RTE National Symphony Orchestra  on Friday 3 May 2019 in the National Concert Hall, Dublin in a presentation with live music of Steven Spielberg’s 1977 masterpiece ‘Close Encounters of the Third Kind’.  The film features a groundbreaking and magnificent score written by John Williams, which was performed live and in sync with the film.   The choir was proud to be asked to participate in this popular presentation.

The choir gave a concert performance of Monteverdi’s L’Orfeo at the Freemasons’ Hall, Molesworth Street, Dublin 2 on Saturday 23 March 2019.    Written in 1607 for a court performance during the annual Carnival at Mantua, L’Orfeo is the earliest surviving opera that is still regularly performed. 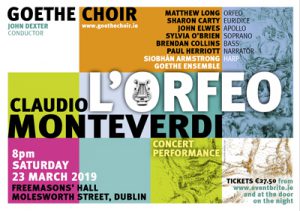 The performance featured the following artists:

with the Goethe Choir & Goethe Ensemble conducted by John Dexter. 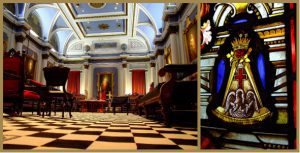