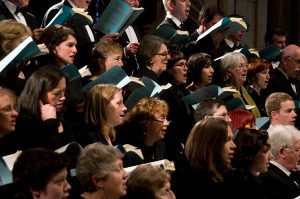 The Goethe Choir was founded in 1965 as the Goethe-Institut Choir at the request of the Director of the (then) German Cultural Institute, Dr Eugen Vetter, to enable engagement with choral music by singers and audiences in Dublin.

Cáit Lanigan-Cooper assembled a group of friends interested in singing together, and with the support of the Institute the choir soon increased in numbers and performed regularly in major venues in Dublin — a major feature of the early years being the Christmas Concert held in Trinity College Examination Hall.

The choir was privileged to have Cáit as director, manager and impresario until her death in June 1998. During the following year choir members under the leadership of Trish Geaney took steps to ensure that the choir would continue. The Goethe-Institut Choir was re-established with a constitution under which a committee was elected to manage practical matters including finance and to employ a musical director.

Since the appointment of John Dexter in 1998 the choir has grown in size, currently numbering around 80 SATB singers of a wide range of ages and nationalities. We perform at least three concerts per year with professional orchestras or accompaniment in the major Dublin venues and over the years have undertaken trips to choral festivals abroad.  Two regular events are the ever-popular Christmas Concert in the NCH and the Carmichael Centre’s annual fund-raising concert in St. Patrick’s Cathedral, formerly on Good Friday but latterly in May.

The Goethe-Institut continued to make  available a rehearsal space in Merrion Square until  that building was closed for refurbishment in 2014. The Luthergemeinde at St Finian’s Adelaide Road then provided an alternative rehearsal venue where the choir continues to rehearse.  As a result of the physical dislocation choir members began to question the use of Institut in the name and in February 2019 it was decided to recognise the changed circumstances and to make  Goethe Choir the official name. The scope and aims of the choir remain unaltered and we maintain a friendly relationship with the Goethe-Institut.

Visit our Events page for details of upcoming performances.

To hear an example of the choir’s singing, listen below to a performance of Colin Mawby’s arrangement of “Joy to the World”: